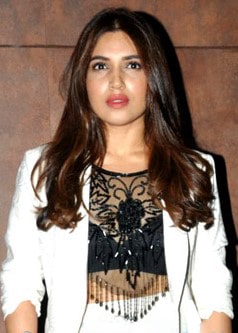 Bhumi Pednekar is an actress in Bollywood and had come to notice with her debut movie ” Dum Laga Ke Haisha”, released in the year 2015. Apart from working as an actress, she also has an experience of working as an assistant casting director.

Bhumi Pednekar made her entry into the Bollywood films with the movie "Dum Laga Ke Haisha" in the year 2015. The movie received a positive response from the audience. In this film, she chose the most challenging task for any female actor. She played the character of an obese girl in the film and gave a rocking performance. Also, she received an award for best female debut in the movie.

With this, she proved that it is not necessary to have a zero figure to gain attention from the audience. Later, she got the opportunity in Akshay Kumar's movie "Toilet - Ek Prem Katha" and Bhumi got popular in the Bollywood. Also, in her next film, "Shubh Mangal Saavdhan"  she played a very different character and impressed everyone with her acting. Bhumi Pednekar movies lists reflect the courage the actress has shown in choosing the films.

Bhumi has changed the way of perceiving an actress and is a role model for many aspiring actresses. By choosing different roles in the initial years of her career, she has proved her mettle to the filmmakers.

Currently, she is working on her upcoming movie, Son Chiriya, in which she is going to be seen with the famous Bollywood actor "Sushant Singh Rajput".