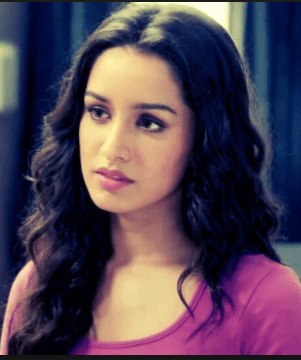 Shraddha Kapoor is a daughter of a famous actor, Shakti Kapoor. She has been working exceptionally well since her debut in the Bollywood and has acted in many hit films. Also, Shraddha is a trained singer and has sung many songs.

Shraddha Kapoor is a cute and soft-spoken actress of Indian film industry. She started her film career with a brief role in the movie Teen Patti and gained recognition with a lead role in the film "Luv Ka The End". Aashiqui 2 was her first movie which made her very popular in Bollywood and she got many new opportunities on the basis of her performance. Shraddha Kapoor movies list shows that she has chosen a wide variety of movies in her film career and proved her acting talent.

In the year 2014, she played a very different role in the movie "Haider" and gained laurels from everyone. She has won many awards for her work and is an inspiration for young actresses. Shraddha is not only an excellent actor but also a very good singer.

Ek Villain, ADCD 2, Baaghi are some of her other films which fared well at the box office and gave a boost to her career. She has an experience of working in every type of genre in a very short time of her film career. Her films namely Half-Girlfriend, Rock On 2, Haseena Parker failed to do good business at the box office.

Currently, she is working with Shahid Kapoor for her upcoming film Batti Gul Meter Chaloo. Also, Shraddha would share the screen with Rajkummar Rao in the horror-comedy movie Stree. She is also going to pair with the Bahubali movie fame Prabhas for the movie, Saaho.