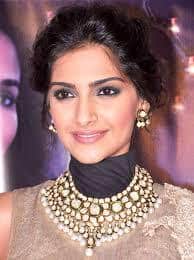 The Fashionista of Bollywood

Sonam Kapoor is one of the highest paid actors in Bollywood. She made her debut in acting with Saawariya in the year 2007. Apart from being passionate about acting, she has trained herself in Kathak & Latin dance. Also, she is widely known for her trendy & fashionable outlook.

BOTY has generated a separate list for Sonam Kapoor Movies which includes all her films. Check out your favorite ones below.

Sonam Kapoor is born to one of the most famous actor-director, Anil Kapoor. Following her family's legacy, Kapoor made her acting debut in the year 2007 & soon became one of the highest paid actors in Bollywood. Sonam Kapoor movies are of full of entertainment. She has worked in films of every genre.

Initially, she started her career as an assistant director to the renowned director, Sanjay Leela Bhansali. Sonam directed him for the blockbuster, Black in the year 2005. After observing her, Bhansali decided to give her a break in acting which resulted in Saawariya. Although this movie didn't work well commercially, her acting was immensely appreciated by the critics.

Further, in the year 2010, she gave her first super hit which was a rom-com, I Hate Luv Storys. Since then, Sonam has delivered several films with almost all the big banners. BOTY has created a list of her movies which contains all her hits & flops.