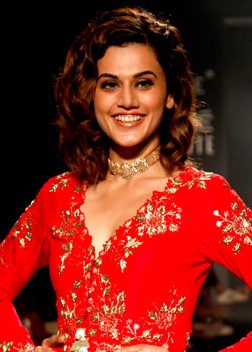 Taapsee Pannu is popular for his work in the South Indian as well as Bollywood films. She is one of the educated actors of Indian film industry and has been working as a model as well as an actress. Tapsee Pannu movies have made a great impact on the minds of the audience and she has received a lot of praise for her work. Due to her glamorous looks and an excellent acting, she has achieved a great place in the Indian cinema in a very less time.

Tapsee Pannu movies have always received a warm response in the theatres. The actress started her career in the South Indian industry but later moved to Bollywood. She made her Bollywood debut with the movie, Chashme Badoor. In the earlier period of her career in the Hindi film industry, she was seen in the serious roles. Her performance in the movies, Baby, Naam Shabana, Ghazi Attack and Pink won everyone's heart.

Later, he got an offer in the comedy film, Judwaa 2 in which she appeared in a completely different avatar. Everyone lauded her work in the movie and her career got a kickstart with the success of the film. Until now, she has not only done many commercials but has also appeared in a wide variety of movies from various regional industries. In the beginning years of her career, Taapsee Pannu got back to back offers in the regional South industries namely, Tamil, Telugu, and Malayalam.

In today's time, Taapsee Pannu is one of the greatest stars of Indian film industry. She has risen to prominence on her own without the help of any film background. Taapse is inspirational for all the young females who are working to achieve big in her life.