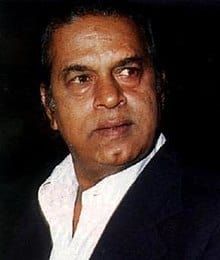 T.L.V. Prasad is equally famous in Hindi & Telugu film industry. The director has done almost 70 movies. Interestingly, almost 30 out of his 70 films are with the Superstar Mithoon Chakraborty. For this, his name has been registered in the Limca Book of Records for doing the highest number of films with a single actor. Since all his films cannot be written here, BOTY has created a list of T.L.V. Prasad Movies which includes all his Hindi as well as Telugu movies.

T.L.V. Prasad is born to a famous Telugu director, Tatineni Prakash Rao. Inspired by his father, Prasad started his career with a Telugu film, Kudi Yeda Miyathae in the year, 1980. Later almost after a decade, he made his directorial debut in the Hindi film industry. Muqadar, Kaalia, Barood, Janta Ki Adalat are all T.L.V. Prasad movies.

The director has made almost 70 films out of which 30 films are with the Superstar Mithoon Chakraborty. In 2004, Prasad made 4 Bengali films with Mithoon. He holds a record for making the highest number of films with a single actor. Furthermore, he is equally famous in Bollywood as well as Telugu film industry.

BOTY has generated a separate column for T.L.V. Prasad movies which includes the list of his Hindi, Bengali & Telugu movies. Find out your favorite ones.