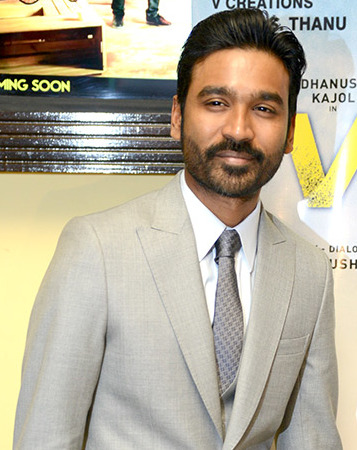 Dhanush is a multitalented personality in the South Indian film industry who has made his name as a filmmaker, an actor, and a singer. Dhanush movies earn a huge amount of money not only in the domestic market but also in the international market. Dhanush didn’t want to enter into the acting field but his brother insisted him to go for it.

Dhanush was born in the film background and hence got an environment to excel in the acting field. He debuted with the Tamil film, Thulluvadho Ilamai, a coming of age film directed by his father. After that, he appeared in many popular films and made his entry into the Bollywood with the movie, Raanjhana. His performance in the Hindi movie was lauded by the critics and it fared well at the box office.

He is also popular as a singer and gives his voice mostly for his films. Dhanush's song, "Why this Kolaveri Di?" became the first Indian song to cross 100 million views on youtube. Because of the deep understanding of music, he has released many popular songs in his music career.

Dhanush movies list includes Kaadhal Konden, Pudhu Pettai, Aadukalam, Velaiilla Pattadhari, Mayakkam Enna, 3, Polladhavan, Padikkathavan, etc. He also made his directorial debut with the movie, Power Paandi, which was also produced by Dhanush under his production company, Wunderbar Films. Many people do not know that he is the son-in-law of Rajnikant and is married to Aishwarya Dhanush, with whom he has two kids.