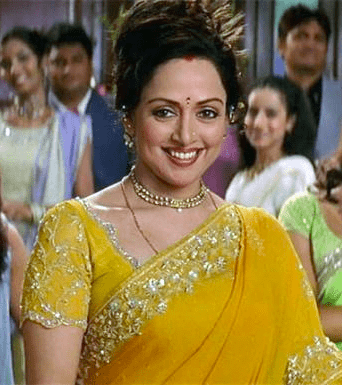 A beautiful veteran actress, Hema Malini has entered the film industry in the 1960s. And within a very short span of time, Hema Malini Movies became a trend among the people. She has set the bar of acting very high for many actresses. Below is Hema Malini all movies list right from the start of her career.

Hema Malini started her career with Tamil Films. But later in 1963, she moved to Bollywood, where she made her debut opposite Raj Kapoor in Sapno Ka Saudagar. Since then, her journey as THE DREAM GIRL took place. And within 4 years of her debut, she became the leading actress of Bollywood. Not just that, she also became the best classical dancer to have taken birth on Indian land. And hence, very soon, Hema Malini Movies became popular among the masses.

In most of her movies, she has either starred opposite to her husband, Dharmendra or opposite Rajesh Khanna and Amitabh Bachchan. Her chemistry with Rajesh Khanna was so much adored by the people, that they became the dream couple of the audience. And hence, most of their movies together became super hits. She has also won several accolades for being a perfect dancer and actor. Her grace can be felt even today.

Throughout her career, she has played several diverse roles. Some in a comic avatar, dramatic role, as a jealous woman in a negative character, as a widow, dancer and many more such challenging roles. Each of her experiment is immensely applauded by her fans. Some of the top Hema Malini movies are Sholay, Seeta Aur Geeta, Patthar Aur Payal, Baghban and a lot more.

BOTY has created Hema Malini Movies list, where all her best works are featured along with their collections. Have a look at the list and pick a movie to watch this weekend.

Not just an actor, Hema Malini has also been a producer, director, and a politician. She is the candidate of BJP and also a strong supporter of PETA. Her marriage was also in news a lot. Hema Malini was supposed to marry Jeetendra. But Dharmendra landed drunk in her wedding, and took her away, turned to Muslim and married her despite being married before.