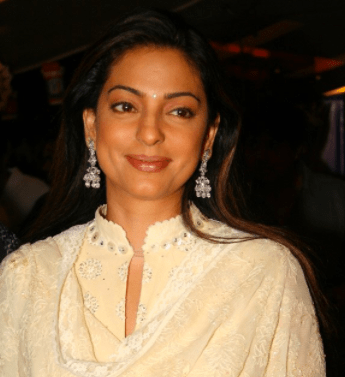 Juhi Chawla is one of the most gorgeous actresses of the 80s to 2000s. Her looks and simplicity added charm to her performance, making most of the Juhi Chawla Movies critical successes. Whether it is Aamir Khan or Shah Rukh Khan, Juhi has looked perfect with every co-actor. Below is Juhi Chawla Movies List, which consists of most of her super hit movies since the start of her career.

Juhi received a breakthrough in her career with Qayamat Se Qayamat Tak in 1988, opposite Aamir Khan. The movie was so much loved that Aamir and Juhi became a super hit on-screen couple. Her charm, innocence, and simplicity wooed the audience and soon Juhi Chawla became one of the top actresses of Bollywood.

Very soon, most of Juhi Chawla movies started becoming super hits, giving the much-needed rise to the actress. Some of her next blockbusters were Swarg, Bol Radha Bol, Darr, Lootere, Aaina, Hum Hain Rahi Pyaar Ke, and many more such movies. Even if the movie goes flop, Juhi was still always applauded for her looks and performance in the movie.

Most of her comedy movies were also blockbusters. Her electrifying and highly energetic performance simply steals the show. Moreover, her comic timing is perfect and screams funny from all angles. Some of her super hit comedies are Yes Boss, Ishq, Deewana Mastana, just to name a few.

Her chemistry with Shah Rukh Khan has also been deeply adored. Whether it is Darr, where Shah Rukh appeared villain against Juhi, or Yes Boss, where she played the love interest of Shahrukh. Juhi Chawla all movies are a treat to watch.

BOTY has created Juhi Chawla Movies list, consisting of most of her hits so far. Pick a movie to watch and enjoy her brilliant and perfect comedy acting.