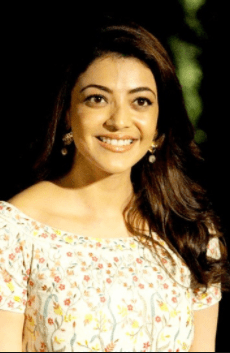 Kajal Aggarwal is an Indian actress, active in Tamil, Telugu, and Hindi film industry. She has appeared in many popular films with talented actors and received laurels from the critics for her acting and looks. Kajal has worked in many highest grossing Tamil movies and is one of the leading actresses of South industry. Also, she is a famous name in the Bollywood for his exceptional performances in many Hindi films such as Singham, and Special 26.

Kajal Aggarwal made her debut as a supporting actor in the Hindi movie, Kyun! Ho Gaya Naa. Later, she got many opportunities in Telugu as well as Tamil industry and established herself as an actress. She appeared in her first Telugu movie, Lakshmi Kalyanam, which did not fare well at the box office. Then came the offer in her career in the form of the movie, Chandamama. This film was a huge hit and also gained her fame in the Telugu film industry.

Her first Tamil film was Pazhami and Kajal also got chance in a couple of Tamil movies during the same period but could not raise her status because of her short roles in the films. Kajal played a double role in the Tamil movie, Magadheere and became a known face for her superb performance in the film. This was a golden phase in her career and later on, she was starred in many critically acclaimed movies of Tamil and Telugu industry.

After working in so many Tamil and Telugu movies, she made her comeback to the Bollywood with the film, Singham. Also, she acted fantastically in the Hindi film, Special 26. Some of her popular movies are Darling, Brindavanam, Mr. Perfect, Businessman, Naayak, Baadshah, Temper, Khaidi No. 150, Naan Mahaan Alla, Maattrraan, Thuppakki, Jilla, and Mersal.