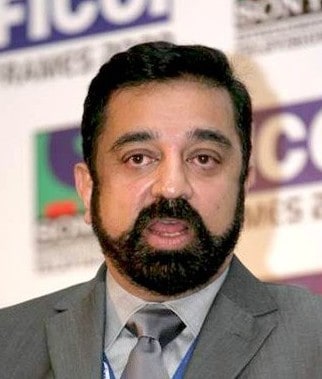 Kamal Haasan is an extremely popular film actor, producer, and director of the Tamil Cinema. He has appeared in many successful Hindi and Tamil movies. Haasan is not only famous for his work in India but his films also his films receive a positive response from all over the world. Due to his immense contribution to the Indian cinema, Kamal Haasan has been awarded many accolades in his lifetime.

Kamal Haasan entered into the film world as a child actor in the movie, Kalathur Kannamma. Everyone largely appreciated his act, and he won a President's Gold medal. Kamal made a full-fledged debut as an adult actor with the movie, Arangetram. Kamal Haasan movies have not only made a significant impact in the Indian cinema but have also earned a place in the overseas theaters. During this phase of his career, he mainly appeared as a supporting actor and worked as an assistant director.

Some of the prominent roles of Kamal Hassan were in the movies namely, Moondram Pirai, Nayakan, Indian, Hey Ram, Virumaandi, Vishwaroopm, to name a few. Apart from working in the films, he also jumped into the politics and had launched his party, Makkal Needhi Maiam.

BOTY has prepared a list of Kamal Hassan movies. All his famous works are included in this collection. Check out the list and notify us if we missed anything.