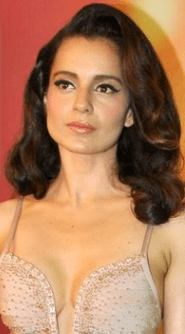 Kangana Ranaut is one of the most versatile actors in Bollywood. Also, she is among the highest paid heroines of the Hindi film industry. No matter her movies do well or not, her performance in every movie is immensely appreciated. BOTY has generated a separate list of Kangana Ranaut Movies which includes all her hit, flop & upcoming movies.

Tanu Weds Manu, Tanu Weds Manu Returns, Krrish 3 etc are some notable Kangana Ranaut Movies. She made her debut in the year 2006 with Anurag Basu's thriller, Gangster. Very soon, she became one of the highest paid actresses of Bollywood by delivering several hit movies.

Her 2008 release, Fashion in which she was the supporting actress with the lead actress Priyanka Chopra gave her enormous popularity. After this film, she managed to enter the league of famous & established personalities of Bollywood.

Moreover, Kangana Ranaut has been the part of some Bollywood's grossing films. In addition, she played the main lead in Hrithik Roshan starrer Krrish 3.

To know more about Kangana Ranaut movies, go to BOTY which has created a full list of her hit, flop & upcoming movies.