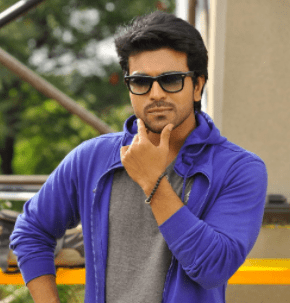 The superstar of Tollywood, Ram Charan is one of the highest paid Telugu actors. Ram Charan movies are full of action and romance. And hence, a lot more entertainment than many other Hindi or Telugu movies. His popularity is not only limited to the South Indian states but all over India as well as the USA also.

Ram Charan is the son of original Mega Star of Tollywood, Chiranjeevi. Carrying forward a popular family name in the movie industry is not easy. But Charan has proved his mettle very strong in Tollywood. He is one of the superstars of Telugu Movie Industry. And not only Telugu, Ram Charan movies are even popular in Hindi cinema as well.

His debut movie, Chirutha, failed to succeed at the box office. But his second movie, Magadheera, became one of the best and highest grossing movies of Tollywood. More than any other genre, dance and action seem to be his forte. But he is also a very popular romance king.

Not just in Tollywood, Ram Charan has also done few movies in Bollywood as well, like Zanjeer, where he starred opposite Priyanka Chopra. Some of his popular Telugu movies include Rachcha, Orange, Dhruva, and Rangasthalam.

BOTY has created Ram Charan Movies list, where you will find all his movies whether Telugu or Hindi. Pick one to download and enjoy the acting of South's Mega Star.