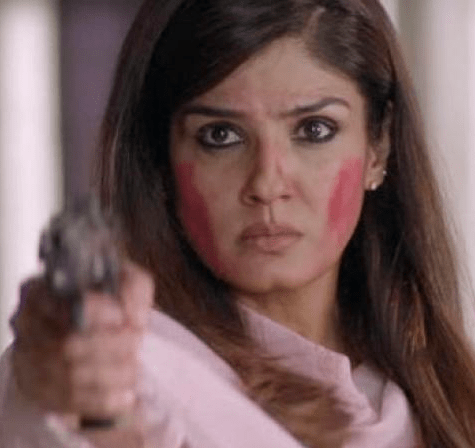 Raveena rose to prominence in the 2000s and became the leading actress of that time. Debuting in 1991, Raveena has given nearly 3 decades to the film industry. Other than Bollywood, she has done movies in Tamil, Telugu and Kannada cinema as well. Below is Raveena Tandon movies list, consisting of all her hit movies till date.

Raveena was not always interested in acting. But when people praised her beauty during her modeling career, she thought of trying her hand in Bollywood as well. And soon, Raveena Tandon movies became popular among the people.

She made her debut opposite Salman Khan in Patthar Ke Phool, 1991. Post that, she featured in Dilwale and Mohra, which were huge hits of that time. And with that, her fan following kept on increasing. Because of this, she had to drop out of college since people used to gather in a crowd outside her college in order to meet her.

Slowly, Raveena Tandon became a hugely popular name in the Bollywood cinema. Some of the super hits of Raveena Tandon movies include Andaz Apna Apna, Khiladiyon Ka Khiladi, Ziddi, Bade Miyan Chote Miyan and many more. She was even offered roles in blockbuster movies like Kuch Kuch Hota Hai and Dil Toh Pagal Hai. But she turned down those amazing offers.

During her film tenure, she was linked up with Ajay Devgn as well as Akshay Kumar. Raveena and Akshay Kumar's Jodi was extremely loved by the people. But they broke up some years later.

BOTY has created Raveena Tandon Movies List, where we have mentioned all her hit movies till date. Browse the list and learn a bit more about this gorgeous actress.