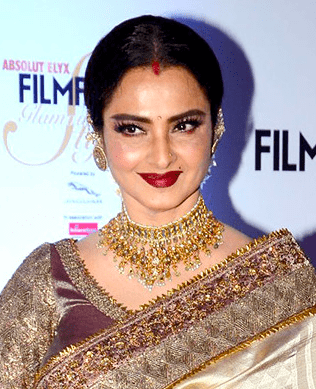 A glamorous yet mysterious Bollywood Diva, Rekha has been through lots of ups and downs in her life. She was initially criticized for her overweight and ungroomed. But soon, she reinvented herself just like one of the popular Rekha movies, Khoon Bhari Maang. And today, she is termed as one of the most successful and gorgeous Bollywood actresses.

Rekha started her career at the age of 15 in the movie Anjana Safar. This movie stirred a lot of controversies due to which it released 10 years later under the name Do Shikaari. Hence, the actual start of Rekha movies happened in 1970 with the movie Sawan Bhadon.

Initially, she was highly criticized for her South Indian look, overweight and dark skin. In addition, Rekha was facing a lot of difficulty in speaking Hindi. But with time, she groomed herself to such an extent that she has become a Bollywood Diva today. Even at the age of 60+, she looks ever so gorgeous.

She has starred in many super hit movies in her career. Some of the popular films in Rekha Movies List include Khoon Bhari Maang, Muqaddar Ka Sikandar, Umrao Jaan, Koi Mil Gaya and many more.

Rekha has been quite infamous for her series of boyfriends. She had a very long lasting affair with The Big B of Bollywood, Amitabh Bachchan. The love triangle between Rekha, Amitabh, and Jaya was even portrayed in the movie Silsila.

However, the actress is very popular for her punctuality. In addition, she does not have any makeup artist or hair stylist as well, right from the day one in the industry.

BOTY has created Rekha Movies list, where you will find most of her super hit movies. Check out the list and pick a movie to enjoy.