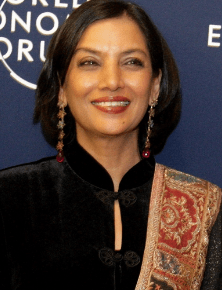 Shabana Azmi was one of the finest actresses of 70’s, 80’s as well as 90’s. She made her acting debut with the film, Ankur in the year 1974. The actress was immensely appreciated & awarded for this film. To know more about Shabana Azmi Movies, check out BOTY where a separate list has been prepared.

Makdee, Masoom, Bhavna, Mandi are some notable Shabana Azmi Movies. The actress made her debut in the year 1974 with Ankur. This film also marks her first award as well. She was honored with the Best Actress Award. Further, she worked in many more films.

Being the daughter of a famous poet & writer, Shabana was always connected to the artistic activities. When she started acting in Bollywood movies, not only her acting but also her looks were immensely appreciated by the audience as well as the makers.

Shabana Azmi won numerous awards for her extraordinary performance in Hindi Cinema. Her awards list not only includes the Filmfare awards but also more National & International awards. Furthermore, in 3-4 decades of her long & successful career, she has appeared in more than 100 movies. To know more about Shabana Azmi movies, go to BOTY.