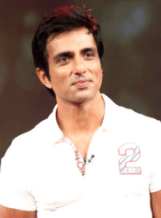 Sonu Sood is best known for portraying the role of villain in films like Arundhati & Dabangg. He works prominently in Tamil, Telugu & Hindi film industry. The actor has worked in around 40 films in almost 20 years of his career. Since all the titles cannot be written here, BOTY has created a special column for Sonu Sood Movies which includes the list of all his films. Check out your favorite ones.

Sonu Sood made his debut with a Tamil film, Kallazhagar in 1999. After working in several South Indian films, he entered the Hindi film industry 2004 release Yuva. He is commonly known for supporting roles & negative roles. Aashiq Banaya Apne, Jodha Akbar, Dabangg, Singh Is Kinng is all Sonu Sood Movies.

Along with Bollywood, Sood prominently works in Tamil as well as Telugu film industry. In South India, he is best known for his negative role in a highly successful film, Arundhati. Further, the actor has worked in some English & Kannada films as well.

In Bollywood, Sonu Sood rose to fame after the release of Salman Khan starrer Dabangg in the year 2010. Along with other actors, Sood's performance was highly appreciated by the critics as well as the makers.

The actor has appeared in more than 40 films including Hindi, Tamil, Telugu & some other languages. BOTY has generated a separate column for Sonu Sood movies which includes the list of all his films.