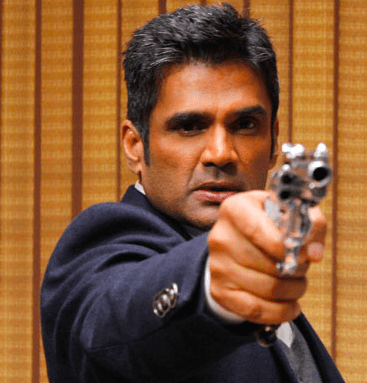 Sunil Shetty Movies have been entertaining the audience since the 1990s. He entered the film industry as an action hero and has successfully maintained that image. During the 2000s, he started appearing in many multi-starrer which were equally loved by the people. BOTY has prepared Sunil Shetty movies list, where you will find his top hits since his debut.

In his film career, Sunil Shetty has worked in more than 100 movies. Predominantly an action hero, Sunil has also done many romantic roles. Not just Bollywood, he has also acted in Malayalam, Tamil, and English movies. Some of the popular Sunil Shetty Movies include Dilwale, Mohra, Rakshak, Border, Hera Pheri, Dhadkan and many more.

During the 90s, Shetty gave some amazing blockbuster movies. But during the early 2000s, he moved to more multi-starrer roles, like Hera Pheri. Along with that, Shetty also appeared as the villain in many movies, like Main Hoon Na. Overall, Sunil Shetty movies have been very diverse. And people have loved him in all kinds of roles.

His movies with Akshay Kumar have been blockbusters. For example, Dhadkan, Hera Pheri, Phir Hera Pheri, Waqt Hamara Hai and many more. He has won several awards for his movies, more for his villain roles like in Dhadkan and Main Hoon Na.

Family and Other Businesses

Sunil Shetty has 2 children Athaya and Ahan. And both of them have started moving on their father's steps. Where Athaya appeared opposite Suraj Pancholi in Hero, Ahan will be seen in Sajid Nadiadwala's upcoming movie.

Other than acting, Shetty has some other businesses as well. He runs a production company under the name of Popcorn Entertainment. He also manages a restaurant, boutique, and two pubs.

BOTY has created Sunil Shetty movies list, which includes all his hits & flops to date. You can check this list and know a few things about your favorite Sunil Shetty Movie.