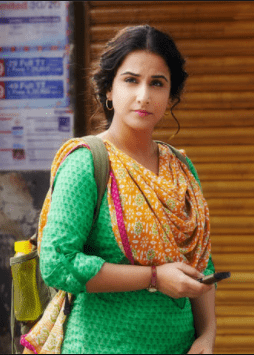 Vidya Balan is a very talented actress and is famous for her choice of films. She has set a new image of a Heroine in the film industry and inspired many people with her work.

Vidya Balan started as a Tv actor and also worked in many music videos to gain experience in the field of acting. After that, she faced a lot of struggles and managed to get a chance in the regional movies.
Vidya made her debut in the year 2003 with the Bengali film, Bhalo Theko.

Parineeti was her first Hindi film, and she received accolades for her superb acting in the movie. After that, she grabbed her next opportunity in the movie "Lage Raho Munna Bhai" and gained the attention of the audience.
One distinctive trait about her personality is that unlike other actresses, she never focusses on "Zero figure" and still is a famous actress in the Bollywood. Also, she is known for doing experiments with her role in the films.
Some of the famous movies in which she has worked in her career are Parineeta, Lage Raho Munna Bhai, Heyy Babyy, Paa, Ishqiya, Kahaani, and Tumhari Sulu.
All her popular movies and their box office details are given on BOTY. Have a look!