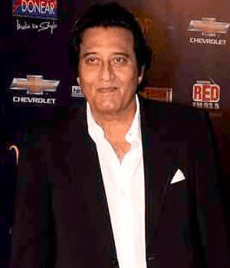 Starting out as a Villain, Vinod Khanna became a popular actor in the Hindi film industry. Not just an actor, he was also an active politician and MP. Vinod Khanna movies entertained the people for nearly 5 decades. He has worked with several actors in his film career. And has also won several awards for his brilliant acting.

Vinod Khanna made his debut in 1968 as a villain. And then for many years, he appeared in villainous or supporting roles in multiple movies, like Mastana and Purab Aur Paschim. And after 3 years, he got his 1st break as the lead actor. He appeared in Hum Tum Aur Woh, in 1971, which was a great hit.

Since then, there was no turning back for this great actor. He got several awards and was lauded for his amazing work in the film industry. Be it villain or lead hero, army officer or a college professor, he has done full justice to each and every role he portrayed.

Some of the popular Vinod Khanna movies include Imtihaan, Amar Akbar Anthony, Mukaddar ka Sikkandar, and several more. He had stirred many controversies in his life, where he kept on continuing the intimate scenes with his co-actors even when the director said cut. His sons Rahul and Akshaye also entered the movie industry. However, both failed to make a big name for themselves.

BOTY has created Vinod Khanna movies list, where you can check out most of his super hit movies. We will keep updating this list with his other movies regularly.