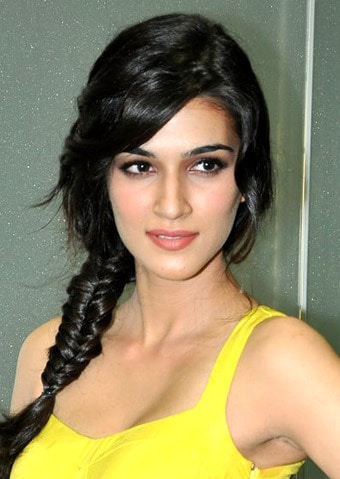 Kriti Sanon is a young talent in the Bollywood. She does not belong to a filmy background but has made a respectable place for herself in the film industry within a few years of her debut.

Kriti Sanon is one of the most glamorous actresses of Indian film industry. Before diving into the film industry, she started her career as a model. And with the passage of time, she has made massive progress in the Bollywood.

Kriti has given many confident performances in her career and also received laurels for her exceptional dancing skills. Kriti Sanon Movies list shows the wide range of choice she has made in choosing the films.

Krti made her debut with the Telugu movie, Nenokkadine in the year 2014. Due to her superb acting in the film, she got her first opportunity in the Hindi film, Heropanti. The film performed well, and everyone admired Kriti for her beautiful looks and superb acting.

After that, she got a chance to work in a multi-starrer film, Dilwale. In this film, she worked with famous actors Shahrukh Khan and Kajol. Her pairing with Varun Dhawan in the movie received appreciation from the audience. Also, Dilwale turned out to be one of the highest grosser films and collected a handsome amount.

Her movie "Raabta" with the actor Sushant Singh Rajput but the film couldn't manage to lure the audience. In the movie, Bareilly Ki Barfi, she was appreciated for her performance, and the film performed well at the box office.

Currently, Kriti Sanon is working on his upcoming film "Panipat" with Arjun Kapoor. This film is expected to release in the next year.

We hope you liked our list of all her popular movies. Kriti Sanon movies list gets updated with time