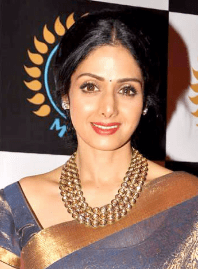 Sridevi was regarded as the first female Superstar of Indian Cinema. Apart from Bollywood, she was the Superstar of Tamil, Telugu & Malayalam film industry as well. The actress has done numerous films. BOTY has created a full list of Sridevi Movies which includes the films of every language. Check out the list & find out your favorite ones.

Before entering the Hindi film industry, Sridevi has done numerous Tamil & Telugu films. In the year 1983, she made her debut in Bollywood with Sadma. Further, she gave several hits & started working in Hindi films as well. Mr. India, Chandani, Chaalbaaz, Nagina, Lamhe, Judaai are some notable Sridevi Movies.

In Bollywood, Sridevi was one of the leading ladies of 80's. Interestingly, most of her hits were with Anil Kapoor. Her pair with the superstar Anil Kapoor was much loved by the audience on the screen. In addition, she has worked with almost all the bigwigs of that time. She was one of the finest & the most beautiful actress of Indian Cinema.

After doing around 30 films in her peak career of almost 15 years, Sridevi made her comeback with Gauri Shinde's drama, English Vinglish in the year 2012. Her performance in this film was tremendous. The 2017 release Mom was her last film. It was one of the superhits of that year.

To know more about Sridevi Movies, check out the list generated on BOTY. It includes the full list of her Tamil, Telugu & Hindi films.