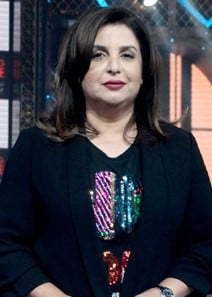 Farah Khan is a famous film producer, director & a scriptwriter who is prominently known for her choreography in Bollywood. Farah has choreographed over 100 songs in Bollywood. In the year 2004, she made her directorial debut with Shah Rukh Khan starrer Main Hoon Na. Further, she made many more movies with SRK. BOTY has created a list of Farah Khan Movies which includes all her films.

Om Shanti Om, Main Hoon Na, Tees Maar Khan, Happy New Year are all Farah Khan movies. Interestingly, she has been the scriptwriter of all her directorial. Also, most of her movies have featured the superstar Shah Rukh Khan in the lead role.

Khan is married to a film producer & editor, Shirish Kunder who was the editor of her first film, Main Hoon Na. Her 2007 Bollywood release Om Shanti Om collected around Rs 150 crores worldwide.

Later her 2014 release, Happy New Year was such a blockbuster that it collected over Rs 150 crores in domestic market itself. To know more about Farah Khan movies, checkout BOTY where a list of all her films has been created.